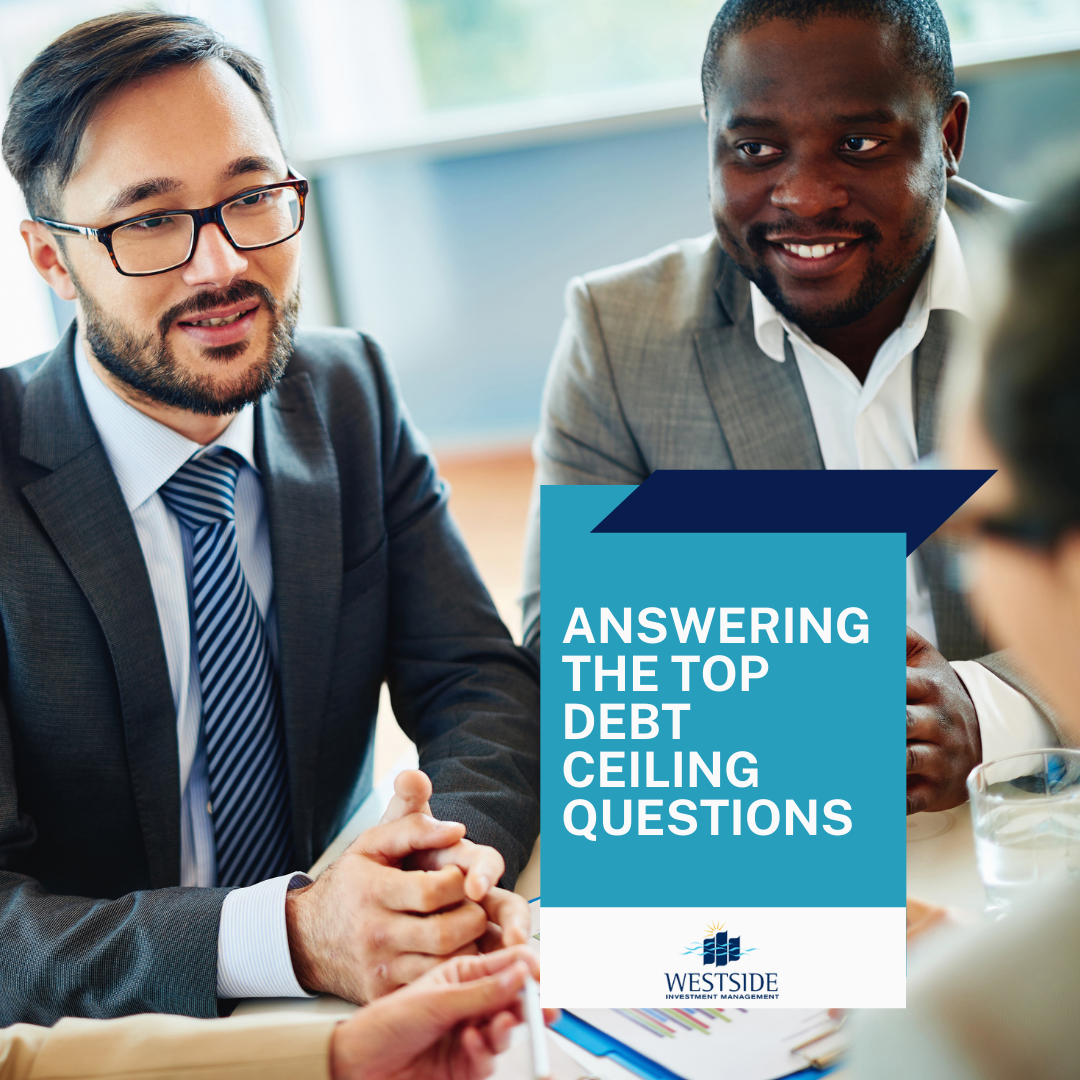 Democrats and Republicans struck a deal to raise the debt ceiling, prompting a relief rally in equity markets. While failing to raise the debt ceiling was extremely unlikely, if it had happened it could have potentially done considerable damage to markets and the economy. But even approaching the deadline when the government would no longer be able to meet its obligations was having an impact. The mere appearance of Democrats and Republicans playing politics with the deadline was weighing on markets and forcing businesses to prepare for the very unlikely, but still possible, outcome of a government default.

Unfortunately, we may have to do this all over again in December, and Congress does not yet seem to have fully learned from the 2011 debt-ceiling debacle that this issue is not to be taken lightly. Even if the current solution is just kicking the can for a couple of months, it does remove the immediate danger and opens up additional paths to address the problem well before the next deadline.

The important debt-ceiling debate will continue, although with a reduced sense of urgency in the near term. In this Weekly Market Commentary, we take a closer look at the debt ceiling and the potential consequences of failing to raise it.

1. What is the debt ceiling?

The debt ceiling is the limit on how much the federal government can borrow. Unlike every other democratic country (except Denmark), a limit on borrowing is set by statute in the U.S., which means Congress must raise the debt ceiling for additional borrowing to take place.

The debt ceiling was originally created to make borrowing easier by unifying a sprawling process for issuing debt to help fund U.S. participation in World War I. The process was further streamlined to help fund participation in World War II, creating the debt-ceiling process in use today. According to the Constitution, Congress is responsible for authorizing debt issuance, but there are many potential mechanisms that could make the process smoother.

3. Why is it important to raise the debt ceiling?

The government uses a combination of revenue, mostly through taxes, and additional borrowing to pay its current bills—including Social Security, Medicare, and military salaries—as well as the interest and principal on outstanding debt. If the debt ceiling isn’t raised, the government will not be able to meet all its current obligations and could default.

5. Is the debt ceiling being raised to cover potential new spending programs?

No. Lifting the debt ceiling does not authorize any new spending. The debt ceiling needs to be raised to meet current obligations already authorized by Congress. Theoretically, not raising the debt ceiling would limit spending in the future, but only by deeply undermining the basic ability of the government to function, including funding the military, mailing out Social Security payments, and making interest and principal payments on its current debt. While perhaps symbolic of excessive spending, the debt ceiling is not the appropriate instrument to limit spending. Spending responsibility sits with Congress and the president, but Democrats and Republicans have both favored deficit-financed spending once in power. Bill Clinton’s presidency, much of it with a Republican Congress, was the only one that saw the publicly held national debt decline since Calvin Coolidge in the 1920s.

6. When was the debt ceiling last raised?

In August 2019 the debt ceiling was suspended for two years in a bipartisan budget deal and reinstated on August 1, 2021 at a level covering all borrowing to that date, the dashed line in Figure 1 representing the debt increase over that two-year period. Additional borrowing above the level that went into effect on August 1 has not been authorized.

7. If we were at the debt ceiling on August 1 and nothing happened, why is there a problem?

When we hit the debt ceiling, the Treasury is authorized to use “extraordinary measures” that allow the government to continue to temporarily meet its obligations, including suspending Treasury reinvestment in some retirement-related funds for government employees. The additional funding available through these measures is limited. Treasury Secretary Janet Yellen had said extraordinary measures would no longer be able to cover all government obligations as of October 18.

The recent increase in the debt ceiling will enable the government to meet its obligations through December 3, with maybe an additional few weeks from extraordinary measures, which have already been depleted.

9. Who won the debt ceiling battle?

Markets, the economy, and U.S. households and businesses. As for who won the battle politically—we leave to the politicians and voters.

10. What would the Treasury have to do if Congress failed to act in time?

In 2011 and again in 2013, Federal Reserve and Treasury officials developed a plan in case the debt ceiling wasn’t addressed in time. At that time, they determined the “best” course of action would be to prioritize debt payments over payments to households, businesses, and state governments. By prioritizing Treasury debt obligations, it was assumed that the financial repercussions would be minimized. However, given recent comments by rating agencies (more on this below), there’s no guarantee that prioritizing debt payments would stave off severe, longer-term consequences like a debt downgrade or higher borrowing costs. Nonetheless, in order to adhere to the full faith and credit clause within the Constitution, debt-servicing costs would likely be prioritized.

11. U.S. Treasury debt was downgraded in August 2011 because Congress waited until the last minute to raise the debt ceiling. Could we see additional rating changes this time?

In August 2011, even though Congress acted before the U.S. was no longer able to meet all its obligations, one of the three main rating agencies, Standard & Poor’s (S&P), downgraded U.S. Treasury debt one notch from AAA to AA+. While the other two rating agencies retained the U.S. AAA rating, they both downgraded the outlook to negative. S&P has maintained that AA+ rating since 2011.

Today, another of the three main rating agencies, Fitch, has threatened to downgrade U.S. debt if the debt ceiling isn’t raised or suspended in time. Further, Fitch has stated that prioritization of debt payments would lead to non-payment or delayed payment of other obligations “which would likely undermine the U.S.’s ‘AAA’ status.” So even if the Treasury made debt payments on time, the other obligations would be missed and likely result in a rating downgrade. Other rating agencies probably would follow suit as well. Another downgrade by a major rating agency may call into question use of Treasury securities as risk-free assets, which would have major financial implications globally. Of course, don’t forget that after the downgrade in August 2011, investors flocked to long-term U.S. Treasuries.

12. Could failure to address the debt ceiling push the economy into a recession?

It would depend on how long the Treasury would have to prioritize payments. If the delay is only a day or two, then it is unlikely the economy would slow enough to actually enter into a recession. Payments that were deferred would be repaid in arrears, so the economic impact would likely be minimal. However, if payment prioritization is necessary over a prolonged period of time—say a month or longer—this could indeed cause economic activity to contract. Since the government is running a fiscal deficit of around 7% of gross domestic product, and the Treasury could not issue debt to cover that deficit, spending cuts would need to take place. In that scenario, according to analysis by Oxford Economics, $1.5 trillion of spending would need to be cut. The spending cuts, if prolonged, would likely push the U.S. economy into recession. Moreover, the unknown knock-on effects, such as the impact on business confidence, would also likely slow economic growth.

13. How would a technical default impact the financial markets?

In 2011, which is probably the closest comparison to this year, the S&P 500 Index fell by over 16% in the span of 21 days due to the debt-ceiling debate and subsequent rating downgrade. The equity market ended the year roughly flat, so investors who were able to invest after that large drawdown were rewarded. However, that large drawdown was due solely to the policy mistake of not raising the debt ceiling in a timely manner. It’s likely that if Congress were to wait until the last minute again before raising or suspending the debt ceiling, equity markets would react similarly.

Despite the downgrade, demand for intermediate and longer-term Treasuries actually picked up during the market volatility, pushing yields lower, as Treasuries are generally considered a “safe haven” asset. While that may have been the market reaction in 2011, there is no guarantee that, in the event of a technical default and further rating downgrades, Treasury securities would have a positive return this time around—particularly if Treasury securities lose their reputation as bonds that have no default risk.

Given the experience from 2011, we think it was prudent for Congress to raise the debt ceiling reasonably in advance of the October 18 deadline when the government would likely no longer be able to meet all its obligations. Political brinksmanship with the debt ceiling is a dangerous game, with likely relatively little to gain and much to lose. Despite the extension, the legislative agenda for the fourth quarter remains packed, we may run into the same problem again in December, and both parties are similarly motivated. But the extra time does mean there is an easier path to addressing the debt ceiling through the budget reconciliation process if Democrats choose to use it. For now, the relief from even the unlikely possibility of a debt-ceiling crisis is welcome and markets are justifiably reassured.

This material is for general information only and is not intended to provide specific advice or recommendations for any individual. There is no assurance that the views or strategies discussed are suitable for all investors or will yield positive outcomes. Investing involves risks including possible loss of principal. Any economic forecasts set forth may not develop as predicted and are subject to change.

References to markets, asset classes, and sectors are generally regarding the corresponding market index. Indexes are unmanaged statistical composites and cannot be invested into directly. Index performance is not indicative of the performance of any investment and do not reflect fees, expenses, or sales charges. All performance referenced is historical and is no guarantee of future results.

Any company names noted herein are for educational purposes only and not an indication of trading intent or a solicitation of their products or services. LPL Financial doesn’t provide research on individual equities.

All information is believed to be from reliable sources; however, LPL Financial makes no representation as to its completeness or accuracy.

The Standard & Poor’s 500 Index (S&P500) is a capitalization-weighted index of 500 stocks designed to measure performance of the broad domestic economy through changes in the aggregate market value of 500 stocks representing all major industries.

The PE ratio (price-to-earnings ratio) is a measure of the price paid for a share relative to the annual net income or profit earned by the firm per share. It is a financial ratio used for valuation: a higher PE ratio means that investors are paying more for each unit of net income, so the stock is more expensive compared to one with lower PE ratio.

Earnings per share (EPS) is the portion of a company’s profit allocated to each outstanding share of common stock. EPS serves as an indicator of a company’s profitability. Earnings per share is generally considered to be the single most important variable in determining a share’s price. It is also a major component used to calculate the price-to-earnings valuation ratio.

All index data from FactSet.

This research material has been prepared by LPL Financial LLC.