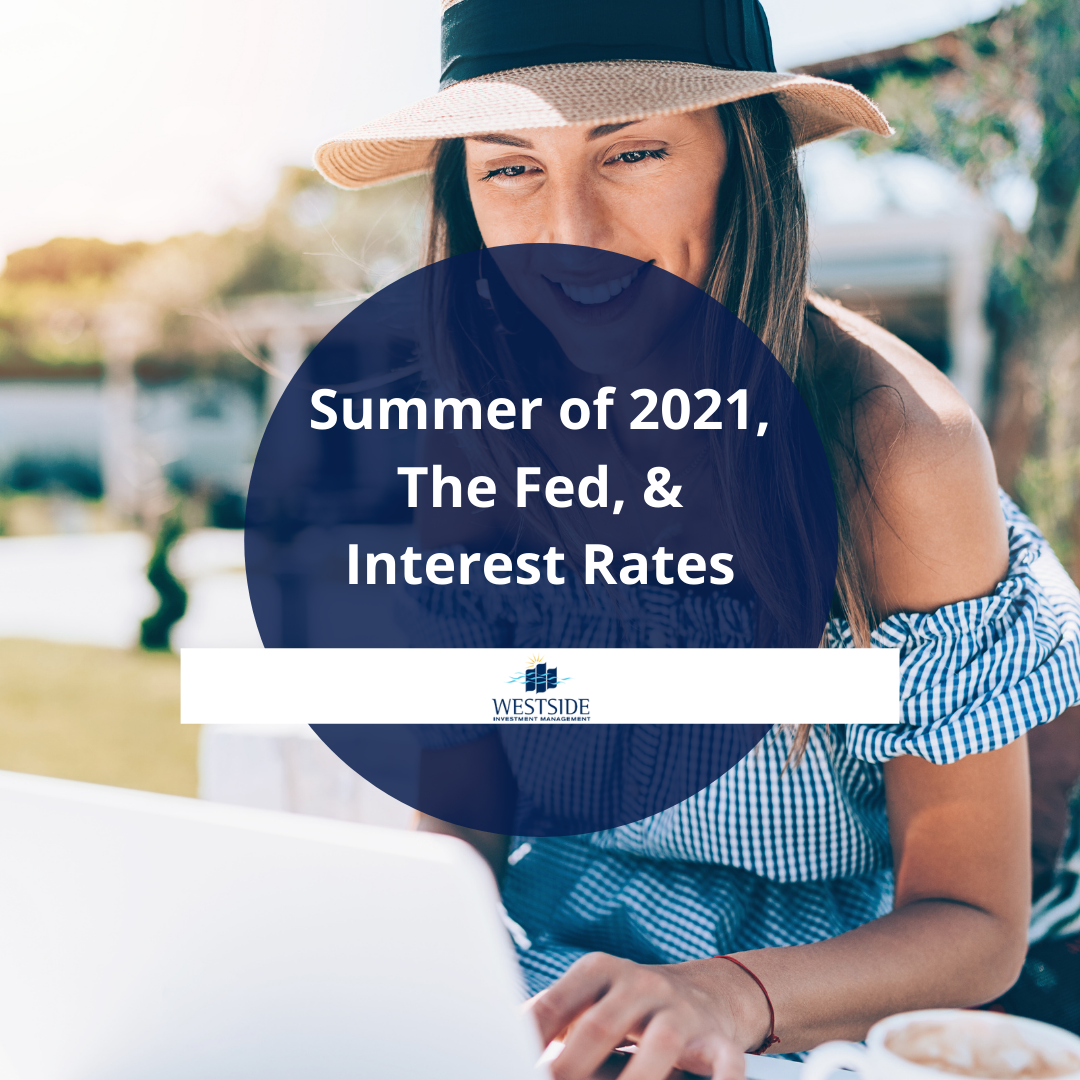 A few days before the official start of summer on June 21st, Wall Street’s eyes and ears were on the Federal Reserve, and as expected, the Federal Open Market Committee (FOMC) made no changes to the fed funds rate or the pace of asset purchases.

But what was surprising, at least to some, was that the Fed seemed to signal two rate hikes by the end of 2023. Prior to this week’s meeting, expectations were for no rate hikes through 2023 and one or two rate hikes in 2024.

But even more troubling to those who want rates kept low is that seven members of the FOMC indicated that they expected a rate hike next year.

Federal Reserve Chair Jerome Powell seemed accommodative in his remarks following the FOMC policy statement, but it was St. Louis Fed President Bullard who sounded more hawkish in an interview when he acknowledged that he was one of the seven calling for a rate hike next year.

Historically, Fed officials have generally provided advance warning about coming increases in interest rates. When, or if, the Federal Reserve Bank raises interest rates, how will that affect consumers and businesses? In particular, what about the consequences for certain segments of the economy?

The most important tool available to the Fed is its ability to set the federal funds rate, or the prime interest rate. This is the interest paid by banks to borrow money from the Federal Reserve Bank. Interest is, basically, the cost to the banks of borrowing someone else’s money. The banks will pass on this cost to their own borrowers.

As a way to boost the economy, remember that the Fed set its benchmark interest rate close to zero in late 2008 and did the same thing at the beginning of the COVID pandemic. This resulted in “free money.”

By reducing the federal funds rate, the Fed increased the supply of money by making it less expensive to obtain. As a result, businesses could have greater access to money. They could spend more on building their businesses and on hiring more employees. Because consumers and businesses had more money, they could purchase more goods, services, houses, and stocks.

Increasing the federal funds rate, on the other hand, reduces the supply of money by making it more expensive to obtain. Reducing the amount of money in circulation, by decreasing consumer and business spending, helps to reduce inflation. However, the Federal Reserve has to decide whether the increase in consumer demand and in hiring has led to enough inflation in prices to warrant a reduction in rates.

Consequences for Consumers and Businesses

Any increased expense for the banks to borrow money has a ripple effect, which can influence both individuals and businesses in their costs and plans.

Effect on individuals – Banks increase the rates that they charge to individuals to borrow money, through increases to credit card and mortgage interest rates. As a result, consumers are likely to have less money to spend. They may be faced with the effect on what they want to purchase and when to do so.

Effect on business – Because consumers will possibly have less disposable income, businesses must consider the effects to their revenues and profits. Businesses also face the effect of the greater expenses of borrowing money. As the banks make borrowing more expensive for businesses, companies are likely to reduce their spending. Less business spending and capital investment can slow the growth of the economy, decreasing business profits.

These broad interactions can play out in numerous ways.

The stock market as a whole – Stock prices decrease when investors see companies reduce growth spending or make less profit. Absent other economic effects, the value of stocks in general will fall.

Investing in stock includes numerous specific risks including: the fluctuation of dividend, loss of principal and potential illiquidity of the investment in a falling market.

Bond market – As the stock market drops, investors tend to view the risk of stock investments as outweighing the rewards. They will often move toward the safer bonds and Treasury bills. As a result, bond interest rates will generally rise, and investors will likely earn more from bonds.

The dollar – When other central banks are expanding the money supply, it can weaken the value of their currencies. If the Fed hikes the interest rate, then the dollar appreciates. A stronger dollar means that U.S. consumers pay less for imports. A stronger dollar will boost U.S. demand for products from Asia and Europe, which will increase corporate profits there. As a result, global stocks will likely increase in value.

Commodity prices – A stronger dollar has often contributed to the reduction in oil prices in the past year. As the dollar could become even stronger with the reduction of interest rates, the prices of commodities, especially oil, should decrease. And often the opposite is true. Of course, investments in oil stocks will likely also lose some value.

Commodity-linked investments may be more volatile and less liquid than the underlying instruments or measures, and their value may be affected by the performance of the overall commodities baskets as well as weather, geopolitical events, and regulatory developments.

The federal budget – The U.S. government has a very large debt, and increased interest rates lead to higher interest payments.

Corporate borrowers – Companies that are repaying loans will end up with higher interest payments.

Mortgage holders – Payments on mortgage interest will increase for individuals and companies whose mortgages do not carry a fixed interest rate.

Obviously, many factors affect activity in various parts of the economy. A change in interest rates, although important, is just one of those factors.

Timing and Reports from the Fed

The Federal Open Market Committee, which sets the rates, will meet again four more times before next year, starting on:

While there are few expectations to begin raising rates in 2021, circle these dates on your calendar and expect to hear lots of chatter.

And while many factors can affect the market, it is important to prepare for any effects on your business, your livelihood, and your investment portfolio when an increase in the federal funds rate does take place.

Be sure to talk to your financial professional for specific guidance.

All information is believed to be from reliable sources; however LPL Financial makes no representation to its completeness or accuracy.

The opinions voiced in this material are for general information only and are not intended to provide specific advice or recommendations for any individual.

This information is not intended to be substitute for specific individualized tax advice. We suggest that you discuss your specific tax issues with a qualified tax advisor.

This article was prepared by FMeX.